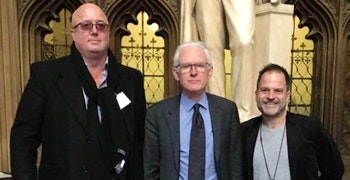 Mr Wright, a former employee of the Royal Bank of Scotland (RBS) raised serious concerns about the Complaint Commissioner’s failure to hold the FCA to account for market abuse issues. Mr Wright claims that the FCA has been complicit in a long-running cover-up of market abuse by former Royal Bank of Scotland executives that wiped out billions of pounds of employees’ savings.

In the course of his role as a manager, Mr Wright and other managers were requested in or around September 2008 to read a statement that was prepared by RBS on its intranet to staff, colleagues and customers, thereby inadvertently misleading them as to the financial strength of RBS at that time and encouraging them to retain their shares in the Group, and to leave their money in the bank, preventing a run. Staff, customers, and shareholders who had listened to the advice to retain their shares and investments, had seen the value of their shares subsequently drop by 90%.

Mr Wright then blew the whistle about RBS Directors misleading staff and shareholders during his employment at RBS. He also reported his concerns to the FCA. The Defendants allege that the intranet statement had never been made and was a figment of Mr Wright’s imagination.

As a result of his whistleblowing, Mr Wright was put under immense pressure at work by RBS, which had a detrimental impact on his mental health. He was then forced to take redundancy in July 2013.

Mr Wright subsequently complained to the Complaints Commissioner about the FCA’s findings, which were dismissed on 7 October 2020.

On 29 June 2021, Rahman Lowe  lodged an appeal with the Court of Appeal on the grounds that:

The case is of considerable public interest as we are holding the FCA and the Complaints Commissioner to account. Mr Wright’s appeal also raises the importance of regulators acting impartially when investigating complaints so as to ensure that the public are not exposed to market abuse.

It is only with your support that Mr Wright can continue to hold the Complaints Commissioner and FCA to account. He is fundraising for fees using Crowd Justice. If you would like to make a donation to his campaign, you can do so here.