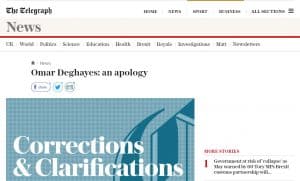 Rahman Lowe Solicitors successfully represented Mr Omar Deghayes in his defamation claim against The Telegraph and Daily Telegraph who have apologised and agreed to pay damages and legal costs.

The Telegraph and Daily Telegraph published a number of articles which falsely suggested that Mr Deghayes used tax payers’ money from compensation he received from the UK Government which related to his unlawful rendition and subsequent unlawful detention, without charge, at Guantanamo Bay in order to fund and encourage his nephews to attend a local gym where they were allegedly radicalised.

“I’m pleased that the Telegraph has acknowledged that they published a baseless and unfounded allegation and have set the record straight.

It is regrettable that the writer and publisher did not attempt to verify the story they were publishing. The harm that has been inflicted can never truly be rectified.”

The Telegraph published the following retraction and apology online, and on page 2 of the Daily Telegraph on 1 May 2018:

“Articles published on 28 July 2017 and 26 September 2017 suggested that Omar Deghayes had used some of the compensation monies received from the British government for its alleged involvement in his rendition and unlawful imprisonment in Guantanamo Bay, to pay his nephews to attend a gym where they had been radicalised. Two of his nephews were later killed whilst fighting in Syria. We now accept that, although some of the information we published was drawn from a local authority Serious Case Review, Mr Deghayes had not paid or encouraged his nephews to attend the gym nor was he responsible for his nephews travelling to Syria. We apologise to Mr Deghayes for any distress caused and have agreed to pay him damages and legal costs.”

Our extensive experience of acting in high profile discrimination cases means that we are particularly well placed to advise clients whose case may reach the public eye, and to advise on associated matters such as reputation management.