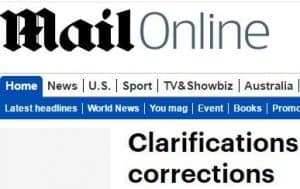 Rahman Lowe Solicitors have represented Mr Ashraf and Mrs Zaman in their defamation claim against Associated Newspapers Ltd over MailOnline articles, which has been concluded successfully today.

MailOnline published a number of articles which falsely suggested that the couple were involved an Islamist campaign of intimidation to take over Clarksfield primary school in Oldham with the aim of imposing an aggressive and separatist Islamic agenda on the school. They now accept that such allegations are wholly unfounded and have apologised to Mr Ashraf and Mrs Zaman and have agreed to pay substantial damages and costs.

“We are really pleased with this outcome. These allegations against us have now been recognised to be false by four different newspaper groups.  MailOnline is the most widely read news website in the UK and some of the online comments that were made on their articles concerning our family were truly horrific. We are therefore particularly pleased that they have now set the record straight.”

Zillur Rahman of Rahman Lowe Solicitors and Mark Henderson of Doughty Street Chambers acted for the Claimants in this case. They have also acted for the Claimants in defamation claims against News Group Newspapers (“NGN”), Mirror Group Newspapers (“MGN”), and Telegraph Media Group (“TMG”) which have already concluded with payment of damages and published retractions and apologies for similar articles in The Sun, Daily Telegraph, and Mirror. Claims continue with respect to articles in The Express, The Times, and Sunday Times.

The retraction and apology is published on MailOnline (which can be viewed by clicking here) in the following terms:

Our reports on 19 and 20 February last year suggested that Nasim Ashraf and Hafizan Zaman were involved in a suspected ‘Trojan Horse’ plot involving an Islamist campaign of intimidation to take over Clarksfield primary school in Oldham with the aim of imposing an aggressive and separatist Islamic agenda on the school. We accept that such allegations are unfounded. We apologise to Mr Ashraf and Mrs Zaman for any distress caused and have agreed to pay them substantial damages and costs.

The statements published by NGN, MGN, and TMG in The Sun, Telegraph and Mirror, can be found here, here, and here.

Our extensive experience of acting in high profile discrimination cases means that we are particularly well placed to advise clients whose case may reach the public eye, and to advise on associated matters such as reputation management.